I learnt to sail on a laser and in my late teens sailed my own Hobie 16 and 18.

When I was 15, I was a Tender Driver and Start Boat driver at MHYC with Steve Perks.

I have sailed may on many boats including:

* Adams 10 metre - The Bird and we were the winner of first gun boat trophy.

* Paladin owned by Col Franklen, we were fourth overall and Division B winner in the Sydney to Hobart Yacht Race 1986

Growing up and sailing with and against some amazing sailors made me a better sailor. This includes Steve White, Peter Ryan, Andrew Pearson, Graeme Ferguson, Greg Hyde, George Canfield,  Craig Nicholls and Roger Hickman. A highlight for me was sailing with three amazing women on Apocalypse - Julie Hodder, Susie Standard and Karen Ovari. Never did I see these girls take a step backwards.

What I loved about sailing was the excitement of the start, AND the beer after. Sailing with legends was also a bonus - Hugh Treharne, Gary Geitz were the nicest people.

But the camaraderie and bond you get when you sail offshore with people lasts forever. A good owner makes a happy boat. Some of the greatest I sailed with were Ken White, Simon Green, Rob Reynolds, Sir James Hardy, Bob Steel and Craig Neal. 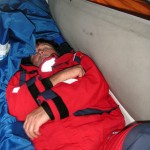 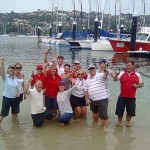