John Dibble was a great businessman running Tip Top Australia for many years and instrumental in their sponsorship of the 1987 America's Cup teams.

John was a proud member for many years of Middle Harbour Yacht Club (joining in 1971)and sailed under the MH10 number with his trade mark blue and white kites. 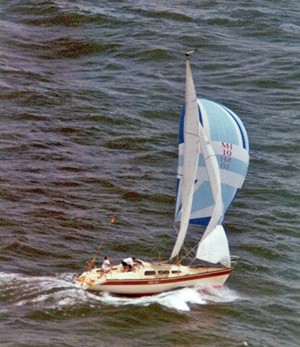 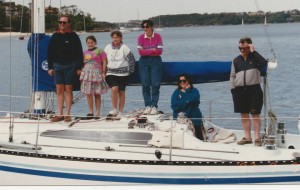 Pawtucket and the Yeomans family

He then bought a Compass 28 called Giselle (MH224) which he kept for three years before upgrading to a Compass 30 called Diablo (MH53) for four years.

In 1976 he bought the yacht Defiance from Andrew Clinton, an S&S 30. The original wooden Defiance was built by Doug Brooker for Norm Brooker.

In 1983 John bought the yacht Farr Out (MH10) and their best result was a second in in IOR on the Coffs Harbour Race.

After the Farr was the Beneteau 30 Chateau Nerf, then a Dragonfly 32 called Dragonfly followed by Tasman Seabird called Gip and lastly the Pawtucket.

Dad also sailed from Pittwater to Sydney on the day of the Sygna storm on Saturday 25/05/74. This was the day and night Manly pool was destroyed. He did this on a Compass 30 called Diablo. His attention to having everything right on his boat saved his life and his crews lives.

Jaime said "Dad loved sailing, competing, and having a beer with mates".