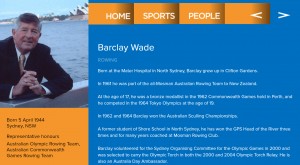 Born at the Mater Hospital in North Sydney, Barclay grew up in Clifton Gardens.

In 1961 he was part of the all-Mosman Australian Rowing Team to New Zealand.

At the age of 17, he was a bronze medallist in the 1962 Commonwealth Games held in Perth, and he competed in the 1964 Tokyo Olympics at the age of 19.

In 1962 and 1964 Barclay won the Australian Sculling Championships.

A former student of Shore School in North Sydney, he has won the GPS Head of the River three times and for many years coached at Mosman Rowing Club.Barclay volunteered for the Sydney Organising Committee for the Olympic Games in 2000 and was selected to carry the Olympic Torch in both the 2000 and 2004 Olympic Torch Relay. He is also an Australia Day Ambassador.