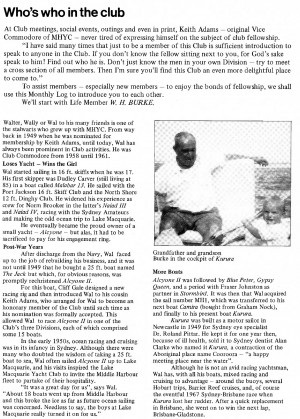 At Club meetings, social events, outings and even in print, Keith Adams - original Vice Commodore of MHYC - never tired of expressing himself on the subject of club fellowship.

"I have said many times that just to be a member of this Club is sufficient introduction to speak to anyone in the Club. If you don't know the fellow sitting next to you, for God's sake speak to him! Find out who he is. Don't just know the men in your own Division - try to meet a cross section of all members. Then I'm sure you'll find this Club an even more delightful place to come to."

To assist members - especially new members - to enjoy the bonds of fellowship, we shall use this Monthly Log to introduce you to each other.

Walter, Wally or Wal to his many friends is one of the stalwarts who grew up with MHYC. From way back in 1949 when he was nominated for membership by Keith Adams, until today, Wal has always been prominent in Club activities. He was Club Commodore from 1958 until 1961.

Wal started sailing in 16 ft. skiffs when he was 17. His first skipper was Dudley Carver (still living at 85) in a boat C2MQ6. Malabar 13. He sailed with the Port Jackson 16 ft. Skiff Club and the North Shore 12 ft. Dinghy Club. He widened his experience as crew for Norm Brooker in the latter's Naiad III and Naiad IV, racing with the Sydney Amateurs and making the odd ocean trip to Lake Macquarie.

He eventually became the proud owner of a small yacht - Alcyone - but alas, it had to be sacrificed to pay for his engagement ring.

After discharge from the Navy, Wal faced up to the job of rebuilding his business, and it was not until 1949 that he bought a 25 ft. boat named The Jack but which, for obvious reasons, was promptly rechristened Alcyone II.

For this boat, Cliff Gale designed a new racing rig and then introduced Wal to his cousin Keith Adams, who arranged for Wal to become an honorary member of the Club until such time as his nomination was formally accepted. This allowed Wal to race Alcyone II in one of the Club's three Divisions, each of which comprised some 15 boats.

In the early 1950s, ocean racing and cruising was in its infancy in Sydney. Although there were many who doubted the wisdom of taking a 25 ft. boat to sea, Wal often sailed Alcyone II up to Lake Macquarie, and his visits inspired the Lake Macquarie Yacht Club to invite the Middle Harbour fleet to partake of their hospitality.

"It was a great day for us", says Wal. "About 18 boats went up from Middle Harbour and this broke the ice as far as future ocean sailing was concerned. Needless to say, the boys at Lake Macquarie really turned it on for us."

Alcyone II was followed by Blue Peter, Gypsy Queen, and a period with Fraser Johnston as partner in Stormbird. It was then that Wal acquired the sail number MH1, which was transferred to his next boat Camira (bought from Graham Nock), and finally to his present boat Kurura.

Kurura was built as a motor sailor in Newcastle in 1949 for Sydney eye specialist Dr. Roland Pittar. He kept it for one year then, because of ill health, sold it to Sydney dentist Alan Clarke who named it Kurura, a contraction of the Aboriginal place name Cooroora - "a happy meeting place near the water".

Although he is not an avid racing yachtsman, Wal has, with all his boats, mixed racing and cruising to advantage - around the buoys, several Hobart trips. Barrier Reef cruises, and, of course the eventful 1967 Sydney-Brisbane race when Kurura lost her rudder. After a quick replacement in Brisbane, she went on to win the next lap, Brisbane-Gladstone.

Two other ocean races were indirectly responsible for Walter Burke becoming the first Rear Commodore of the Ocean Cruising Club in Australia.

Membership of this world-wide body is restricted to yachtsmen who have sailed a course of not less than 1,000 miles between two ports in a vessel not exceeding 70 ft. LOA. Wal met this qualification in the first Sydney-Noumea race in 1952 and again in 1958 when he crewed in the second race in the English yacht Kochab, owned by Dr. I . J . Franklen-Evans, one of the foundation members of the then recently formed OCC.

"Long ocean races are definitely out for me," says Wal. " I still enjoy a day race or an overnighter, and there'll be plenty of time for leisurely cruising. I'll probably look around for a lighter boat - and after that nature can take its course."

And that, all too briefly, outlines the sailing saga of Walter Burke - a highly experienced blue water man and a boon companion on land or sea.

He has worked continuously to advance the interests of Middle Harbour Yacht Club, generously supported by his wife, Doris - herself an Associate Member, and a tireless co-worker for the Club.