The remarkable success of the small yachts, particularly Half Tonners, in the Caltex Sydney to Mooloolaba ocean race, was underscored in MHYC's annual event to Queensland.

Nuzulu, the smallest yacht among the 44 yachts to finish the 480 nautical mile race, sailed home to victory under spinnaker as a long-awaited south-easterly front swept up the NSW North Coast. This change was too late for the big boats, with line honours going to Peter Walker's yacht Amazon, in the slowest race time since 1980.

Amazon took 82 hours 6 minutes 31 seconds to sail the course, an average of only 5.7 knots, compared with the amazing record set by Helsal in 1976 in a southerly gale.

The dominance of small yachts extended to the IMS division, with the overall top place on corrected time going to Dow Air owned by the Farr Lap syndicate.

Nuzulu, a 30 footer owned by Sydney yachtsmen Ed Psaltis and Peter Ward, finished late on Saturday night to displace the bigger yachts on corrected time. Until the late south-caster, Gary Appleby's one tonner Sagacious V, had looked like winning his final race.

In the end, Sagacious V was placed sixth on IOR overall, first in its division and was a member of the winning NSW Caltex State of Origin Team supported by Colin Wilson's Never A Dull Moment and Peter Hayes' High Anxiety.

To beat the highly-ranked Pemberton III on corrected time, Nuzulu had to finish within 30 minutes. Nuzulu got their break when Mackay navigator, Bob Thomas, set a course to sail inside Cook Island, giving Nuzulu a close spinnaker reach past the Gold Coast, whereas Pemberton III was sailing" square, out wider.

For Amazon, her second ocean race since being launched proved challenging as she fought out line honours with the Brindabella owned by George Snow of Canberra. At one stage of the race, the two big yachts engaged in a tacking duel crossing paths several times before settling down to concentrate on their goal of finishing first at Mooloolaba.

Although 14 yachts retired from the fleet of 58 starters, the race was relatively free from drama. Two yachts were dismasted - front runners Bolle Wild Thing from Melbourne and the luckless OZ Fire from Lake Macquarie. Whilst three yachts received a 10 per cent placings penalty for exceeding the total weight limit for their crews under the IMS rules.

However, for 1990 IOR winner Freight Train, the race ended suddenly on the second night at sea, when she hit an unchartered rock south of Crowdy Head as she sailed close inshore. The impact pushed the keel up through the aluminium hull of the 62 footer and taking water fast, skipper Damien Parkes headed into Forster for more pumps, before returning to Sydney.

MHYC welcomed entrants from around Australia, which with Caltex's continuing support of this race, has proven that turning left at the heads is the way to go again in 1992! 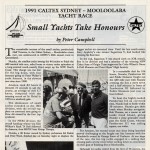