Weather: Light Nor'easter at the start and light favourable breezes for several days. Breeze turned South off the Tasmanian coast and continued to the finish. 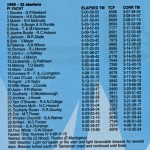