Hobart Race Already Has A Record of Adventure 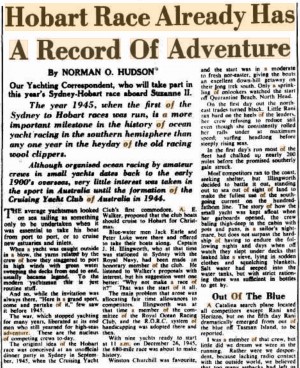 Our Yachting Correspondent, who will take part in this year's Sydney-Hobart race aboard Suzanne II.

The year 1945, when the first of the Sydney to Hobart races was run, is a more important milestone in the history of ocean yacht racing in the southern hemisphere than any one year in the heyday of the old racing wool clippers.

Although organised ocean racing by amateur crews in small yachts dates back to the early 1900*s overseas, very little interest was taken in the sport in Australia until the formation of the Cruising Yacht Club of Australia in 1944.

The average yachtsman looked on sea sailing as something only to be undertaken when it was essential to take his boat from port to port, or to cruise new estuaries and inlets.

When a yacht was caught outside in a blow, the yarns related' by the crew of how they staggered to port in high winds with green water sweeping the decks from end to end, usually became legend. To the modern yachtsman this is just routine stuff.

And so, while the invitation was always there, "Here is a grand sport, come and partake of it," few saw it before 1945.

The war, which stopped yachting for many years, liberated at its end men who still yearned for high-seas adventure. These are the nucleus of competing crews to-day.

The original idea of the Hobart race was conceived at an unofficial dinner party in Sydney in September 1945, when the Cruising Yacht Club's first commodore, A. E. Walker, proposed that the club boats should cruise to Hobart for Christmas.

Bluewater men Jack Earle and Peter Luke were there and offered to take their boats along. Captain J. H. Illingworth, who at that time was stationed in Sydney with the Royal Navy, had been made an honorary member of the club. He listened to Walker's proposals with interest, but his suggestion  went one better: "Why not make a race" of it?" That was the start of it all.

The main problem that arose was allocating fair time allowances to competitors. Illingworth was at that time a member of the committee of the Royal Ocean Racing Club, and the R.O.R.C. system of handicapping was adopted there and then.

Winston Churchill was favourite, and the start was in a moderate to fresh nor-easter, giving the boats an excellent down-hill getaway on their long trek south. Only a sprinkling of onlookers watched the start off Quarantine Beach, North Head.

On the first day out the north, east trades turned black. Little Rani ran hard on the heels of the leaders, her crew refusing to reduce sail even though she consistently rolled her rails under at maximum speed, surfing headlong before steeply rising seas.

In the first day's run most of the fleet had chalked up nearly 200 miles before the promised southerly gale struck.

Most competitors ran to the coast, seeking shelter, but Illingworth decided to battle it out, standing out to sea out of sight of land to make the fullest use of the south going current on the hundred fathom line. The story of how the small yacht was kept afloat when her garboards opened, the crew baling thigh-deep in the cabin with pots and pans, is a sailor's nightmare, but does not surpass the hardship of having to endure the following nights and days when off watch they slept under decks that leaked like a sieve, lying in sodden clothes and squelching blankets.

Salt water had seeped into the water tanks, but with strict rationing there was sufficient in bottles to get by.

Out Of The Blue A Catalina search plane located all competitors except Rani and Horizon, but on the fifth day Rani dramatically emerged from out of the blue off Tasman Island, to be reported.

I was a member of that crew, but little did we dream we were in the running. Rather were we despondent, because lacking radio contact with the outside world, we believed that too many setbacks had left us a very bad last.

Rani's performance was remarkable in that she finished 17 hours ahead of the crack Winston Churchill, and won by 30 hours on corrected time.

All the yachts finished safely; Illingworth had set a standard; and the foundation stone had been nicely laid for long-distance off-shore racing.

So great was the enthusiasm engendered by the first event that the second race was immediately scheduled for the following year and 19 yachts started.

The yachts crossed- the line in a spectacular start, for this time hundreds of small craft followed and farewelled the boats down the Harbour and out of the Heads.

Twelve of the 19 finished, and again the smallest boat, Christina, took first place. Christina was eighth across the line and won by a little more than two hours on corrected time.

The big cutter Morna had been the easy first across the line.

In the third event 28 owners were willing to accept the rigours of the race.

Victory went to a Tasmanian entry, Westward, whose win was well-earned as Bass Strait and the South Tasman provided perhaps more than their usual quota of bad weather.

The large number of entries led to the Cruising Yacht Club's decision to split contestants into two divisions, with prizes for first, second, and third in each section, plus the George Adams' Tattersall Cup for the over-all winner.

Change Vindicated The dividing line was set at 32ft rating. This decision was vindicated when results were announced, for the first 8 places on handicaps were filled by smalt division craft and the larger yachts would have been out of the prize list altogether had the race been held under the old conditions.

Last year's event won as much public interest as any of the previous events, but less boisterous conditions were experienced.

The slump to 18 entries was offset by the fact that new boats had been specially built for the event.

Once again, the Hobart cutter Westward, owned and sailed by George Gibson, won the handicap, breaking her previous time by 23 hours, and beating the second place winner Seevogel by a little more than three hours on corrected time.

Morna, skippered by her owner, Sir Claude Plowman, broke her course record to cross the line four days five hours one minute 21 seconds out from Sydney.

And now all eyes are focused on this year's event.

There are fifteen certain starters and as nearly all boats perform equally well, the race is more open than ever. All stand a chance.

Although the field may be lighter, there is an unflagging interest that should keep the race permanently on the list of aquatic events of international standing.