From: Around the World on Sirius

Sirius was well-known as a Sydney Harbour racing yacht in the period up to WWII, when she was pressed into service as a training ship. After the war she was sold and took part in the second Sydney-Hobart race in 1946, and again the following year, when she finished l5th out of 28. In the 1950s, Sirius was sold again and used to carry copra in the Solomon Islands. In I965 she changed hands once more and supported helicopter operations in New Guinea. A tsunami struck while she was there and Sirius was beached high and dry. There was no heavy-lifting equipment to put her back in the water, but fortunately another tsunami a few hours later washed her back to sea.

She returned to Australia in 1974 where she was left in Cairns, and in 1983 she sank in a hurricane.

Over the next seven years Sirius was restored, then sold and taken to Indonesia. Ater a few years of charter work in Bali and Sumatra, she was nearly wrecked on a reef, then sailed to southern Thailand and repaired. In 2001 she was bought by her present owner, the eighth. Sirius has recently been extensively refitted and is being prepared to re-enact the 1930s circumnavigation. 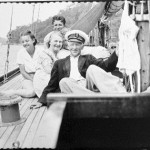 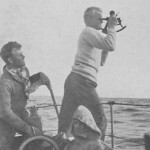 Navigating around the world: Dick Nossiter. Taking a sight on Sirius 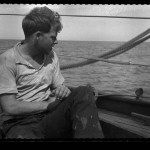