This is the first in an occasional series about boats that have brought a lifetime of pleasure, and education, into my life.  These are "Var Flicka", "Ishkoodah", "Dynamite", "Pampero", "Melite", "Sana", "Plum Crazy", "Kubba-Kubba" and "Zingarro II". 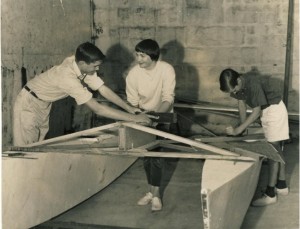 In 1960 my Dad had fallen in love with Sydney; he just needed to convince us all to join him to move here from the USA.  He told Mom there were no mosquitoes in Sydney, and showed her a picture of the Bushells house, a Darling Point waterfront, claiming it was abandoned and possibly for sale.  He gave me a copy of the boating section from the Saturday "Herald" which was replete with all kinds of boats for sale.  "What's a VJ", Dad ?" I asked, and then "How much is 10 Guineas?".

Convince us he did, and in 1962 we all arrived in Sydney.  There were no traffic lights then, the MLC building at North Sydney had just been passed as the tallest building by the "old" AMP building, and Sir Frank Packer was challenging for the America's Cup.  When asked why he did this he answered "Alcohol and delusions of grandeur!" Alan and Marie Stannard were family friends, and they introduced us to Commodore Mike Vaux, who owned the boatshed at Castlecrag.

Before too long I found myself sailing with a school friend who gave me the tiller of his VJ as we reached across Rose Bay, just as the seaplane from Lord Howe was coming in to land. This was the life!

My brothers and I had a small printing business that we ran after school, so I had saved enough money to think about building a boat.  I discussed my idea with a schoolmate, Peter, and we decided to build a new design from Lindsay Cunningham.  This was a catamaran called "Quick Cat".

Cunningham's design was brilliant, and it was all made from one sheet of plywood 25 x 8 feet supplied by Ralph Symonds at Homebush.  Glue was a mix called "Resobond" and the fastenings all came from Kopsens or from Nock and Kirby's, wrapped in brown paper and sold by the pound.  Tools were very expensive, there was no such thing as cheap imports, and power tools were way beyond our budget. We finished the hulls and superstructure; now we needed a mast. We soon sussed out that one of our schoolmates had a dad who was the head of Alcan, suppliers at that time of aluminium extrusions.  We arranged to meet the dad, a Canadian named Mr Runkle, and he agreed to give us an extrusion, 20 feet long from memory, provided we collected it from the factory in Granville.

A week later, after school, Peter and I raced out to Granville on the train and ran to get to the Alcan factory before closing. We picked up the extrusion (literally) and carried it to the bus stop on Parramatta Road.  We enlisted the help of a passer-by, and when the bus to Central arrived, Peter hopped on and I passed him one end of the mast which he held out the window from the back of the bus.  I then got on and sat near the front while our volunteer passed me the other end.  We travelled that way to Central, but there was nobody at the bus stop that we could get to grab the mast, so we dropped it on the footpath, and then alighted.  We then repeated the entire procedure as we changed buses to get to the Eastern suburbs.  A true story, and how times have changed.

Our sail (it had only one) came from Jack Hamilton's loft in Balmain.  Jack later went to the Hood sail loft in Manly, Queensland.

We named the catamaran "Dynamite", painted it bright red, launched it at Lady Martin's Beach, and sailed it out of Woollahra Sailing Club at Rose Bay.  The boat was quite fast, and the faster it went the more the stern would lift out of the water, until at top speed the bows dug in and brought the whole exhilarating experience to a cataclysmic end.

Through "Dynamite" I got to sail on some of the fastest boats of that time, including the 20 ft. Austral catamaran "Jezebel" which was so fast the apparent wind always seemed to be from ahead.

After a year of very exciting sailing, Peter and I sold "Dynamite", recovered our costs and moved on to our next adventures.