From MHYC: The First 60Years

In 1963 Australia announced that it would challenge for the Admiral's Cup and there was considerable excitement as owners prepared for the selection trials. Ron designed a minimum rated, double ended sloop like Carmen called Camille. Trials were held in which Camille tied for first place with the Halvorsen Brothers Freya, while Caprice of Huon tied for third place with Salacia. The selection panel finally gave the nod for the third boat to Caprice of Huon - an emotional moment for Gordon Ingate and his crew. Normal Ridge's Lorita Marie went along as a private entry.

Club moral was running high over Camille's selection of the Admiral's Cup team and all sorts of functions were held for the MC team of Ron Swanson, Frank Likely, Peter Mounsey, Dave Linton, Curley Curlewis and Leo Reilly. Finally the yachts were loaded on board a ship and shipped off, with the crews following by air.

Although we were quietly confident we would not be disgraced, we were not prepared for the horse laughter of the English yachting press. One of their quotes read: 'Very sporting of the Australians to send over a couple of cruising boats (double-enders) and a very old Robert Clark design'.

Once the racing started, attitudes began to change. Caprice loved the smooth water of the Solent and English Channel and won three races. Meanwhile Camille and Freya had experience one bad Solent race which they soon made up for in the Fastnet Race (triple points) when Camille came sixth. The proud Australian team came home with a well deserved second place for the series, with Caprice the top Australian scorer. 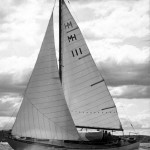 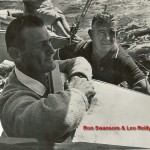 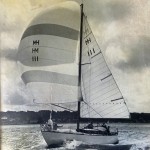