Charles William Fredricks an active member of MHYC for many years from 1960. Bill, as he was generally known did not own his own yacht but was very passionate crew member, sailing every week in the club races on Saturday and the occasionally longer race out to Montague Island. Helen said "The Christmas Parties out at the Basin were a treat for the kids!!"

He raced in the Sydney to Hobart Yacht Race 1968 on the yacht Ophir (MH3). They came 15th out of 67 with 13 retiring! Helen says "I believe it was a very challenging  race that year with very rough weather conditions. They had to offload a crew member in Eden (a doctor) because he was so sick. The family did the BIG trip to Hobart to be there when the yachts sailed in past "The Iron Pot"!  It was my birthday on New Year's Day and I turned 14. I was allowed to venture out into the street on New Year's Eve with my older brother John (5 years my senior), to join in the celebrations in town. It was a big deal!"

He was also a crew member in his earlier membership in the 1960's on the yacht Mawhiti, owned by Fred Porter. Fred built and owned Portervilla Arcade in Dee Why back then. It was an arcade of shops with units above located on the left on Pittwater Road after the service station as you come into Dee Why from Brookvale. This is where Fred and his wife and 4 children lived.

Some Photos Found by his Daughters in Bill's Albums 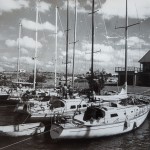 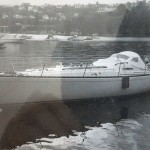 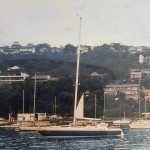 Ciel III (or could be Ceil) 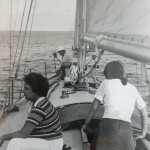 A social day out on Ophir. The lady on the left is Bernice Oliver and Helen Cosgrove is the young girl about to head down. The man at the front is Jack Oliver (owner) 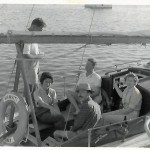 Mawhiti - Bill sitting at back and the woman to right could be Fred Porter's wife. 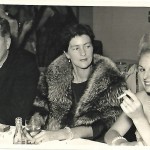 Dinner/dance at the MHYC I am pretty sure. Bill Fredricks (Dad), Margaret Fredricks (Mum) and a good looking blonde lady (unknown). Mum is giving her the look! 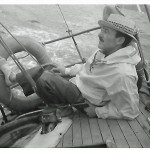