It could be said that planning for the inaugural MMI 3- Ports Circuit began over 5 years ago following the screening of a John Laws special on the British Three Peaks race. This event, now in its 11th year of staging, sets an awesome task for yachts crews, limited to five, which include two runners capable of running to, and scaling, the tallest three peaks in England, Scotland and Wales. And to make life even more uncomfortable for the runners, the mountain peaks are subject to ice, rain, tog and snow. The yachtsmen too have to cope with being le aground as the tide recedes leaving them high and dry, not to mention the necessity to have to row their 36 foot yacht, when becalmed, for miles.

Unfortunately, the proximity of tall mountains to the sea and, just as importantly, to each other, presented some challenges. The most likely contenders, when Sydney's Middle Harbour Yacht Club looked at the proposal, being Yarrahappini near Port Stephens (in the north), and Pigeonhouse Mountain, inland from Ulladulla (in the south). Human capabilities would be more than tested in either, let alone both mountains.

A combination of Pittwater, 20 miles north of Sydney, and Pigeonhouse was settled upon but, due to lack of interest by sponsors, the concept was shelved, although revived on two subsequent occasions when new sponsors expressed interest.

During the entire investigation and planning process, a close association developed with the organisers of the British Three Peaks event. Firstly with the race's founding father, Dr. Robert Haworth, and then, a continuing contact with race organiser, Lt. Col. Colin Walker at Barmouth in Wales.

The development continued, with organisers at Middle Harbour Yacht Club looking to a tighter, although still challenging, schedule. The 350 miles of sailing, coupled with 70 miles of running of the British event could not be expected to maintain interest in this country, so the present format was born.

The MMI 3-Ports Circuit, commencing on October 3rd, 1987, therefore represents over 5 years of planning for this its initial staging. A staging which could not have beer contemplated without the support of the sponsors MMI, and the invaluable help and co-operation of the Maritime Services Board of NSW, the mayor of Wollongong and the people of Port Kembla, the NSW Traffic Police, National Parks and Wildlife Service and the respective local councils through which the event passes. 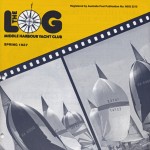 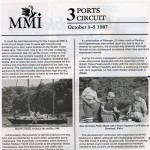 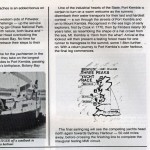