When I was 13 years old I first brought my VJ Quadrant under the old Spit Bridge and raced with the Middle Harbour VJ Club (now the Middle Harbour Amateurs). The club had 70 VJs in those days, racing in two divisions, and was the number one club in New South Wales.

My first experience with Middle Harbour Yacht Club was an invitation yacht race for the Northbridge VJ Club organised by the late Norm Brooker. I sailed on a very large yacht in No. 1 Division in a southerly gale. The names of the boat and skipper escape me but I remember being amazed at the latter's vocal capacity, particularly when the boom broke. I was even more amazed when he decided to continue with a spinnaker pole lashed to the foot of his mainsail. My father also used to race with Jim Mason on his early boats, particularly Tehani and I raced with them occasionally.

So began my love for Middle Harbour. I have raced sailing boats in many places around the World but I have never seen a lovelier place than the areas Where our club races. The lovely clean sandy beaches and the wonderful sandstone sculptures of the headlands (written about and painted by Lloyd Rees), the north-easter haze on the Harbour - all these things are unique to Sydney.

Middle Harbour Yacht Club stalwarts against whom I can remember racing include Fraser Johnston, Jim Burke and Tony Rickards Castlecrag boatshed and sail it up to Middle Harbour through. We used to rig our boat at the Spit Bridge. The Old Spit Bridge was so low that at high tide the VJ would only fit under laid right over. For the next few years I raced Gwen 12s, a 505 and a Flying Dutchman, picking up three New South Wales State Championships in the Gwen 12s.

I then came back to Middle Harbour and raced 16-foot skiffs for seven years. We had an on-going battle with the Maritime Services Board to keep our courses in front of the club but we were eventually successful. I represented New South Wales in six years out of seven, which was just about a record in those days.

We then decided to go into 18-footers. I first intended to race for one year, but it was 12 years later that I eventually called it quits. When I started sailing 18-footers they had no outriggers. I was racing 'eighteens' when outriggers were first installed and I was there when they grew to their maximum of 26 feet wide. Racing with outriggers 26 feet wide was a nightmare and fortunately they had been reduced to 18 feet by the time I left.

In the middle of all this I graduated fiom Sydney University and set up a legal practice in Crows Nest, which I still run today in partnership with Tony Brown (Buster Brown's son). About 1989 I purchased my Adams 10 Jungle Juice, and I have had two previous boats registered with the club, a Hood 23 Cool Octopus and a J24 Yahtzee. I also spent a season sailing with the grand old man of sailing, Noel Hopkinson, on his Colleen-class yacht Shalimar.

I raced Jungle Juice for several years and we won two Australian titles. Then I lost my marbles and returned to 18-foot skiff racing -- not a sensible move for someone in their late fifties. The young guys competing against me gave me heaps. However, we have had a surprising degree of success (we won the 1999 European 18-footer Championship) and I will hang in there for another year or two when I will once again retire to Middle Harbour.

I have also acquired a Farr 50-footer, now called Foxtel Titan Ford, which we race at Middle Harbour. My co- owners are the radio and TV personality Stan Zemanek, and long-time club stalwart Julie Hodder 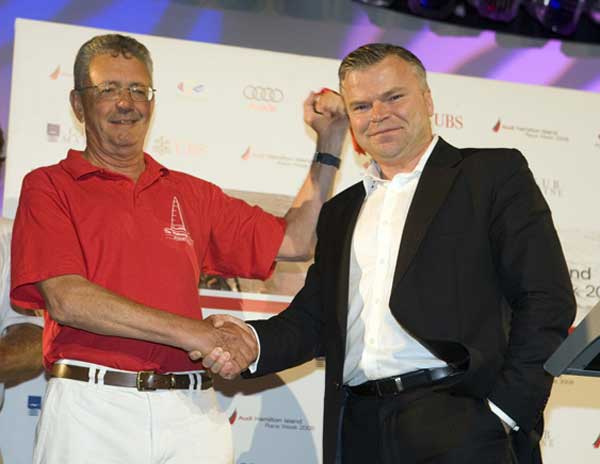