The International Moth is an eleven foot long, high performance, single handed racing dinghy. We are proud to be one of the few development classes left in the world and have very few design rules including no weight limit. We encourage innovation just as much as we encourage sailing skill. We welcome home boat building and wacky designs, and almost importantly, we welcome unconventional people with open arms. This offical Australian Moth web site has all the latest National information that you need to start Mothing right now.

Rigged Weight    as little as 26kgs

Being a retired builder of wooden boats and a keen yachty of 1931 vintage, l find much to interest me in Afloat.

l am saddened to learn of the passing of so many of my old seafaring mates  such as Arthur Byrne whom we sailed against in Norm Brooker's Seawind. We had quite a few great racing battles against his Salacia.

Recently my old cobber, Trevor Riddell, has also sailed off into that harbour in the sky.

I started my apprenticeship with Trevor's father, Andy and Trev's brothers, George and Bob. Trevor was very involved in the AIF and was deeply affected by the war. He found it extremely hard to concentrate. Although starting his apprenticeship two years before the war, he did not complete it till a few years afterwards.

I started my five year course in 1947 and, with the Riddell brothers, built some fine yachts. One notable memory is of the two yachts designed by the late Alan Payne (another good friend) and also the Laurent Giles 10 metre. Even for F.J. Palmer. This boat scored Line Honours in the 1955

Sydney-Hobart Race. My last job with the Riddells was building a Dragon for Norm Booth, the well-known Sydney car dealer.

Vic Robinson lived next door to the Riddell family in Seaforth bay. Upon coming across an article in an American magazine, Vic was very keen to build a Moth Class sailing dinghy. His enthusiasm soon had Trevor and me building one each, too. Before we knew it, we had started a new sailing class on Sydney Harbour!

We constructed a clubhouse in Seaforth bay and had a rapidly growing competitive fleet. Many a talented yachty graduated from these little craft, including another of my deceased mates, Poddy O'Donnell, forehead hand aboard the America's Cup challenger Gretel. 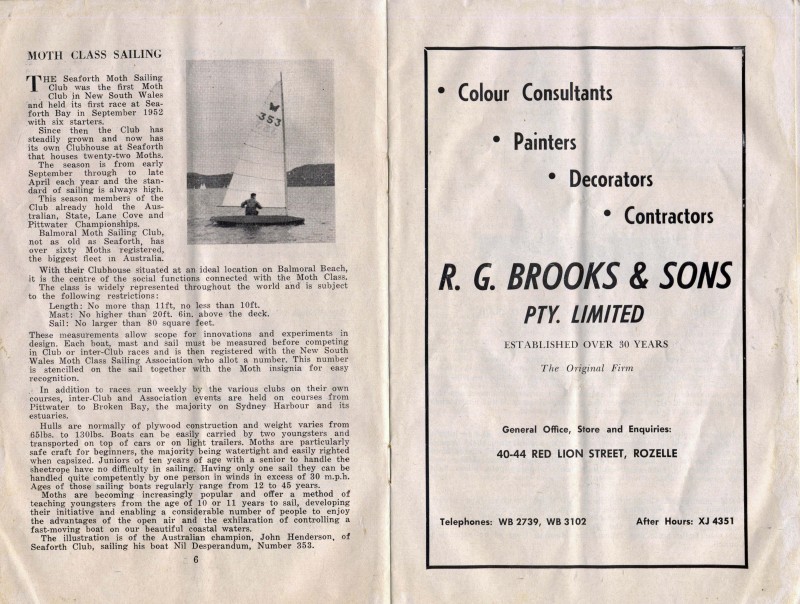